My CLE event this week with the e-Discovery Triumvirate: Judges Facciola, Grimm and Peck; and my upcoming battle at Legal Tech with Craig Ball

I took part in a day-long CLE this week in Charlotte, North Carolina, where the big-three of e-discovery all attended, United States Magistrate Judges Paul Grimm, John Facciola and Andrew Peck. It was great to see the Triumvirate in action, even though I did suffer some friendly abuse from their rulings in the mock court proceedings we set up. Of course, the other side’s repeated reference to me as Sanctions Losey did not help. Yes, I got to play the role of a plaintiff’s lawyer in a mock non-compete case. I’m still waiting for my contingency fee.

A CLE All About Rule 26(f) Conferences

The entire one day event was devoted to Rule 26(f) conferences, where we role-played with frequent Office-type out-takes to explain to the 175 in attendance what we were doing and why. We started with a conference where we did it the wrong way, and then we role-played it again, but this time we did it right (or at least better). This is the kind of in-depth, in-person CLE that I like, where a full day is devoted to a single topic. It was also terrific to have instant commentary by some of the best e-discovery judges in the country.

The local judges, attorneys, corporate counsel, vendors, and techs who took part in the event were very good too, and so was my old friend Sonya Sigler, now with SFL Data, who came all the way from San Francisco. The addition of top local Magistrate Judges David Keesler and Shiva Hodges, shown right, made the event even more interesting for the local Bar in attendance. (By the way, can you guess what judge’s learned hand is also shown in this picture?) These are really good judges who took the opportunity to learn from the Three Wise Men from out-of-town. Occasionally, they even seemed to listen to me! Charlotte is in good hands.

The defense team of local lawyers gave me a real run for the money. Of course, that same team got to dream up the convoluted fact scenario they pegged me with. They had us role-playing a law firm crazy enough to sue our small client’s former employer, a corporate giant, to seek a declaratory judgment on the invalidity of the non-compete they signed before leaving with big customers in tow. They also had us suing the Goliath corporation for trade disparagement, which gave me some fun with the scenario, as we looked for the key words “low dirt.” That was a term we learned the bad defendant was using to disparage our clients.

Yeah, I played with the facts too once I saw the set-up, and like any good plaintiff’s lawyer, waived my arms around a lot and demanded preservation of everything. I even tried crying once when describing my client’s persecution, but I’m a little out of practice in doing that. Still, the audience-students seemed to have a good time with the role-playing and interactions. I certainly got more than my usual share of laughs, and questions, which is how I usually judge the success of my performance-teaching. The mock trial type scenario, if done right, can be a lot more entertaining than just listening to a series of talking heads.

Search, ethics, competence, preservation, rules, privileges, claw-backs, and most every other e-discovery topic you can imagine came up in the course of the mock 26(f) conferences and five judge commentary. As you would expect with Judges Peck, Facciola and Grim in attendance, the hot topic of today, predictive coding, was also discussed at some length.

It was also great to hear all of the triumvirate opine on proportionality and how to control costs. As you know from my last blog, Bottom Line Driven Proportional Review, cost control is my current mission, my way of helping Superman in the never-ending battle for truth, justice and the American way. 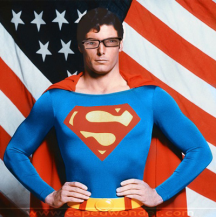 Below is the agenda of the event sponsored by Nova Office, which other vendors might want to look at as an example of the right way to do a CLE. Of course, we deviated somewhat from the script, and went with the flow, but still, the outline may be of some assistance to future CLE organizers. The event itself was called e-discovery judges in charlotte:

Continental Breakfast 7 AM – 8 AM

As an interesting twist, they had a court reporter transcribe the whole event, instead of a more typical video. I’m told it will be posted online in about ten days where it will be freely available to all. Try this address in ten days: www.novaoffice.net/assets/pdf/cle_transcript.pdf

Aside from the Big Three judges, the local judges, Sonya Sigler, and myself, we had a large team of mock 26(f) players, listed below. The opposing counsel who lead the defense team, Jill Griset and Kate Maynard, were worthy adversaries. I hope that my sparring with them helped prepare me for my next debate, which is only against one person. But, that one person is no mere mortal, it is none other than the world-famous Craig Ball, the long reigning champion of e-discovery debates.

The Coming Battle at Legal Tech

Yes. You heard it right, Losey v. Ball. It will be moderated by an esteemed member of the triumvirate, Judge Andrew Peck. I’m told Judge Peck has already used Sherlockian code to predict my loss. Or was it my irrelevance? Not sure. Either way, he seems to think my likely defeat is pretty funny. Judge Peck knows all of our moves, Ball and me. Following the methods of his hero and mine, Sherlock Holmes, he has played out all of the possible permutations in his mind deduced my inevitable defeat. Apparently my only chance of defeating Moriarty requires a suicide jump into the Falls. (Or does it?) Speaking of Sherlock Holmes, have you seen the new movie, A Game of Shadows? Judge Peck and I both say to ignore the critics and check it out.

The debate, some would say sacrifice of the newcomer (me), takes place at Legal Tech on January 31st, 4:00-5:00 pm, at the Sutton Center, 2nd floor. Apparently the very special Master of e-discovery, a/k/a Craig D. Ball, has never been beaten. In fact, most leave the field of law altogether after any attempt, or at least escape to the land of no-debates and no-arguments, just friendly, cooperative dialogue. I’ve heard it’s located somewhere in Arizona.

The legal rumble in New York is sponsored by BIA, Inc. I bet they are still chuckling behind the scenes at finally finding a patsy to take up the challenge of a battle against Ball. I later found out that the first twenty people they asked before me all came up with good excuses to say no, like wanting to save their reputation and avoid public humiliation. Me, I didn’t know any better, and succumbed to their flattery and said yes. (In fairness, BIA is very good at flattery, right Mark?) Only later did I understand the meaning of the evil laughter that followed my assent.

Please show up and cheer me on in the Losey v. Ball debate. I need your moral support as I attempt to do battle with the long-reigning Emperor of e-discovery. At the very least, you can help me pick up the pieces after my thrashing and buy me a drink. If only I knew how to make ESI emit from my hands like Craig does, then I might have a chance. Oh well, at least the defense Bar is with me, even if the force and forensic freaks are not.

The Key Players in Charlotte

In addition to the Big Three of Peck, Facciola and Grimm, here are the key players in my warm up battle in Charlotte last week. You will notice a lot of heavy hitters here from a variety of backgrounds. That is another key ingredient for an event like this.

Final Thanks and Restaurant Review 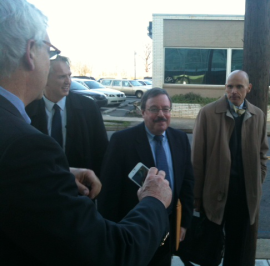 A final special thanks goes out to Doug Moore, of FSO Outsourcing, now hailing from New York City (shown second to left, just behind someone’s big head). Doug did most of the heavy lifting for event planing. He also braved a rainy night in Charlotte to go outside and help me find the restaurant, The King’s Kitchen, at 129 West Trade Street in Charlotte. That is where all of the speakers ate the night before. I highly recommend this restaurant. King’s Kitchen is both a non-profit foundation and restaurant that serves good old-fashioned southern cooking with profits going to help feed the homeless. Can anyone guess Judge Grimm’s favorite food at this restaurant? No, it was not a Happy Meal.

Leave your comments below with guesses on Grimm’s favorite food and the name of the judge whose learned hand graced the second photo from the top. The winners get a free beer or cup of coffee at Legal Tech. (On me, or whatever vendor happens to have an open tab handy, which, of course, is the main reason most of us go to Legal Tech.)

Any debating tips for my battle with Ball would also be appreciated. I already owe him one steak dinner for our prior debate over Phillip M. Adams & Associates, L.L.C., v. Dell, Inc. I said it was a bad decision and would be reversed. It wasn’t. So, I lost the bet. I understand the Legal Tech debate will include the infamous Pippins v. KPG, LLP case. Once again, Master Ball says the decision is sound and will be affirmed. Once again, I predict reversal of this bad opinion. Am I right? What do you think?

This entry was posted on Sunday, January 22nd, 2012 at 4:45 pm and is filed under Evidence, Forensic Exam, Lawyers Duties, Metadata, New Rules, Related Legal Webs, Review, Search, Spoliation/Sanctions, Technology. You can follow any responses to this entry through the RSS 2.0 feed. Both comments and pings are currently closed.

7 Responses to My CLE event this week with the e-Discovery Triumvirate: Judges Facciola, Grimm and Peck; and my upcoming battle at Legal Tech with Craig Ball