An order approving predictive coding was entered on April 23, 2012 in Global Aerospace, Inc. v. Landow Aviation, L.P., et al. This is a complex dispute in a Virginia State Court. The defendants’ motion seeking the order was granted. It is not pretty, and not detailed, but appears to be the second such order in the history of Man. I can’t discuss the first case, but I can and will keep posting the next cases as they come rolling out. I predict there will be many this year. Send them to me, anonymously if you like, as in this case, and I will post them here, in full. I understand that in this second case the vendor was OrcaTec. Here it is (by the way, a short order like this, with handwriting, etc., is not uncommon in state court). 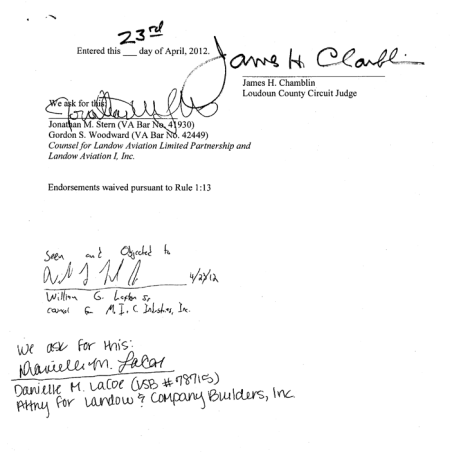 You can also download the order in PDF form here.

A Press Release by the vendor involved, OraTec, came out the day after I first published this news. It provides further background and some interesting quotes. Here are selected excerpts:

The consolidated case stems from a collapse of a commercial structure, which damaged hundreds of millions of dollars in personal property. The defendants are represented by Schnader Harrison Segal and Lewis LLP of Pittsburgh and Baxter, Baker, Sidle, Conn & Jones, PA of Baltimore. Schnader’s e-Discovery Practice Group, led by Thomas C. Gricks III,  initially directed the collection and preservation of the ESI.  When agreement on production methodology could not be reached, Schnader filed a motion for a protective order to allow the firm to use predictive coding to cull the collection.  …

The order was issued after a hearing on the defendants’ motion on Monday. The plaintiffs had argued against predictive coding, saying that it was not as effective as human review. Gricks presented the arguments for predictive coding to the court, noting that Schnader has been successful in using predictive coding to save time and money on first–pass review, which in this case will be significant.  He was backed up by experts Karl Schieneman of Review Less, Timothy Opsitnick of JurInnov, and Dr. Herbert L. Roitblat of OrcaTec.

“The critical point of the order is that the Court allowed a party to choose predictive coding as its preferred method of responding to a request for production of ESI.  His decision was an express recognition of the evolution of document review to deal with ever-increasing volumes of data,” said Gricks.

“We were very pleased to be able to show the scientific accuracy of predictive coding to a court in a formal hearing setting,” said Dr. Roitblat.  “Keyword searching seems to be perfectly acceptable to attorneys, even though several studies have focused on its inaccuracy. If keyword searching with 20 percent proven accuracy is okay, how can predictive coding with more than 90 percent demonstrable accuracy be unacceptable? I see this as the first step in that mental barrier coming down for lawyers.” …

While the issued order was quite short, the judge said in the hearing that a producing party gets to use whatever method it wants to use to review documents. The receiving party can then raise issues if it doesn’t get what it thinks it should have in litigation.  Opsitnick said, “The Judge analogized using predictive coding to a choice between using paralegals or senior partners or younger associates to review documents, which we think is correct. Unfortunately, none of the Court’s helpful explanation made it to the Order this time, but this is the first break in the predictive coding logjam.”

“OrcaTec has shown over and over how much time, money and effort predictive coding saves, plus how great the accuracy and transparency is in using it,” said Roitblat.  “We are very grateful that the court recognized the value of predictive coding.”

Schieneman added, ”This ruling  should give attorneys a real green light for moving ahead with this truly effective technology.”

This entry was posted on Tuesday, April 24th, 2012 at 6:04 pm and is filed under Evidence, Lawyers Duties, Review, Search, Technology. You can follow any responses to this entry through the RSS 2.0 feed. Both comments and pings are currently closed.