Party Ordered to Disclose Where and How It Searched for ESI: You Can Expect This Kind of Order To Become Commonplace

A federal court in Nebraska recently ordered a defendant to disclose all of the sources it searched to respond to an e-discovery request, and to disclose all of the keywords it used to perform its searches. American Home Assurance Company, et al v. Greater Omaha Packing Company, Inc., No. 8:11CV270 (D. Neb. Sept. 11, 2013). This order requiring disclosure of keywords continues a legal trend I have previously reported on in my law firm blog, More Courts Are Requiring Disclosure of Keywords. The American Home case continues this trend in a somewhat unusual and instructive context.

The requesting party plaintiffs in the instant case filed a motion to compel production based solely on the fact that they expected to receive a larger production than they did. They did not point to any missing documents, nor even any types of documents that they expected to receive, but didn’t. They just pointed to the size of the production, only 25 emails, and said that in itself provided good cause to order the defendant to produce more emails and other electronically stored information.

[Plaintiff]has failed to identify a specific e-mail or electronic record that GOPAC is refusing to produce. Rather, Cargill argues that the small number of e-mails produced (25) evidences a lack of diligence in production. GOPAC has an obligation to promptly produce information resulting from timely searches of all digital records over which it has possession or control. However, the Court cannot compel the production of information that does not exist. GOPAC argued before the Court that prior to 2011, it had no central server on which e-mails were stored. GOPAC has further assured the Court that it has turned over all ESI that its searches produced and continues to supplement as it finds additional information. GOPAC has also offered to search available sources using search terms provided by Cargill, but Cargill has refused to supply any additional terms.

Still, Judge Strom went on to compel disclosure of defendant’s search methods and sources as follows:

To provide Cargill an adequate opportunity to contest discovery of ESI, the Court will order GOPAC to disclose the sources it has searched or intends to search and, for each source, the search terms used. The Court will also order all ESI based on the current search terms be produced by November 1, 2013. However, given Cargill’s failure to point to any specific information that has been withheld or additional sources that have not been searched, no further action by the Court is appropriate at this time.

Sometimes there simply is no relevant evidence to be found, or very little. This is not surprising if a claim lacks a solid factual foundation. We all know that many frivolous claims are filed everyday. For instance, if a request seeks production of all emails about an employee that mentions their race, and no such emails exist, the proper response is that there are no documents responsive to the request. This fact alone should never trigger an order to compel. The responding party has already stated there is nothing to compel, that no such emails exist. Still, more and more courts are requiring the responding party to go the extra step and disclose what searches they did before they concluded that no responsive documents existed. Do not expect that these efforts will always be protected by attorney work-product confidentiality. Expect instead that you will be asked to disclose your search efforts. Apple Inc. v. Samsung Electronics Co. Ltd., No.: 12-CV-0630-LHK (PSG), 2013 U.S. Dist. LEXIS 67085 (N.D. Cal. May 9, 2013); Formfactor, Inc. v. Micro-Probe, Inc., Case No. C-10-03095 PJH (JCS), 2012 WL 1575093, at *7 n.4 (N.D. Cal. May 3, 2012); Romero v. Allstate Ins. Co., 271 F.R.D. 96, 109-10 (E.D. Pa. 2010).

Always take care to be reasonable and diligent in your search for responsive evidence. You have a professional duty to do so, both under our ethics code and the rules of procedure. See eg Rule 26(g). Also be prepared to disclose your diligence. In this Nebraska case that meant disclosure of keywords used, and custodians searched. 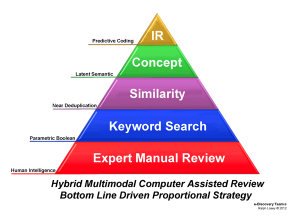 In other cases involving larger, more sophisticated review projects, and multiple modes of search, it may involve more detailed disclosures than just keywords. For instance, what other search methods were used from the familiar search-type pyramid? Although we are not there yet, the day will surely come when use of only one search method, no matter what it is, but especially if it is as simplistic as linear review or keyword, will be considered per se unreasonable.

Is it really diligent to just plug in a few keywords and call that a search? In the nineties I would say yes, certainly. In the early 2000s, I would say yes, probably. But in the second decade of the Twenty-First Century? I don’t know. It depends. I am reminded again of the most famous tugboat in legal history, the T.J. Hooper, and its missing radio. T. J. Hooper 60 F.2d 737 (2d Cir. 1932) (“in most cases reasonable prudence is in fact common prudence; but strictly it is never its measure; a whole calling may have unduly lagged in the adoption of new and available devices.”) (J. Learned Hand); Also See Does Your CAR (“Computer Assisted Review”) Have a Full Tank of Gas?

If the requesting party is ok with just doing keyword search, or even requests it, then fine. But when, as in this American Home case, the requesting party declines to tell the responding party what to do, declines to buy into a keyword approach, then I don’t know. It depends. What keywords were used? How were they used? How much time and effort was spent on the search? Were the keywords tested? Were they adjusted and refined with sampling? Were Boolean connectors used? Were the keywords used parametrically, by which I mean in various metadata fields? Who did the searches? What were their qualifications? What other modes of search were used, and disclosure on each if they were? And of course, the all important what data was searched. Was it just one custodian, or ten? Were all of their writings searched, or just email?

The day will come when, unless stipulated to, the mere use of keyword search, and neglect of all other types of search, is not good enough. The day will come when a judge finds that kind of search to be negligent, unreasonable, and so orders a redo, or imposes sanctions. It may even result in a judgment for malpractice. The day will come when a judge as brilliant and bold as Learned Hand finds that our whole profession has unduly lagged in the adoption of new and available devices, just like Judge Hand held that the entire shipping industry unduly lagged in using radios to monitor the weather. The learned judge will hold that the mere use of keywords alone, even though a professional norm of the legal industry, was still negligent. When that day comes I want to be on the side moving for sanctions, not defending.

History is on the side of technology. Even if our legal profession is notoriously slow to adopt new technologies, new modes of search, you cannot fight the tide of history. Just ask the buggy whip manufacturers. Although certain well-known and powerful Bar groups may still teach tape dictation as part of their CLE program, and not even mention predictive coding (I kid you not, I was there), they are hopelessly out of date, walking anachronisms. They are teaching lawyers to use buggy whips. The future of our profession belongs to the technology minded, to those open to the adoption of new and available devices. Remember the lessons of negligence of Judge Learned Hand. Remember the T.J. Hooper.

If you are part of the forward thinking, and understand the lessons of technology change, join with me and others at the Innovate conference in Florida on October 17 and 18. Improve your skills and stay on the winning side of technological competence.

This entry was posted on Sunday, October 6th, 2013 at 4:34 pm and is filed under Evidence, Lawyers Duties, Review, Search, Spoliation/Sanctions. You can follow any responses to this entry through the RSS 2.0 feed. Both comments and pings are currently closed.

6 Responses to Party Ordered to Disclose Where and How It Searched for ESI: You Can Expect This Kind of Order To Become Commonplace