The defendant in a complex commercial dispute demanded that plaintiff search its ESI for all files that had the names of four construction projects. Am. Mun. Power, Inc. v. Voith Hydro, Inc. (S.D. Ohio, 6/4/18) (copy of full opinion below). These were the four projects underlying the law suit. Defense counsel, like many attorneys today, thought that they had magical powers when it comes to finding electronic evidence. They thought that all, or most all, of the ESI with these fairly common project names would be relevant or, at the very least, worth examining for relevance. As it turns out, defense counsel was very wrong, most of the docs with keyword hits were not relevant and the demand was unreasonable. 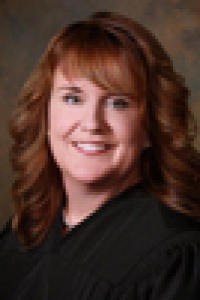 The Municipal Power opinion was written by Chief Magistrate Judge Elizabeth A. Preston Deavers of the Southern District Court of Ohio. She reached this conclusion based on evidence of burden, what we like to call the project metrics. We do not know the total evidence presented, but we do know that Judge Deavers was impressed by the estimate that the privilege review alone would cost the plaintiff between $100,000 – $125,000. I assume that estimate was based on a linear review of all relevant documents. That is very expensive to do right, especially in large, diverse data sets with high privilege and relevance prevalence. Triple and quadruple checks are common and are built into standard protocols.

Judge Deavers ruled against the defense on the four project names keywords request, and granted a protective order for the plaintiff because, in her words:

The burden and expense of applying the search terms of each Project’s name without additional qualifiers outweighs the benefits of this discovery for Voith and is disproportionate to the needs of even this extremely complicated case.

The plaintiff made its own excessive demand upon defendant to search its ESI using a long list of keywords, including Boolean logic. The plaintiff’s keyword list was much more sophisticated than the defendants four name search demand. The plaintiff’s proposal was rejected by the defendant and the judge for the same proportionality reason. It kind of looks like tit for tat with excessive demands on both sides. But, it is hard to say because the negotiations were apparently focused on mere guessed-keywords, instead of a process of testing and refining – evolved-tested keywords.

Defense counsel responded to the plaintiff’s keyword demands by presenting their own metrics of burden, including the projected costs of redaction of confidential customer information. These confidentiality concerns can be difficult, especially where you are required to redact. Better to agree upon an alternative procedure where you withhold the entire document and log them with a description. This can be a less expensive alternative to redaction.

When reading the opinion below note how the Plaintiff’s opposition to the demand to review all ESI with the four project names gave specific examples of types of documents (ESI) that would have the names on them and still have nothing whatsoever to do with the parties claims or defenses, the so called “false positives.” This is a very important exercise that should not be overlooked in any argument. I have seen some pretty terrible precision percentages, sometimes as low as two percent. 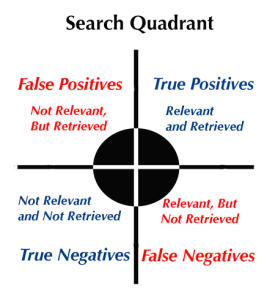 Get your hands in the digital mud. Go deep into TAR if you need to. It is where the time warps happen and we bend space and time to attain maximum efficiency. Our goal is to attain: (1) the highest possible review speeds (files per hr), both hybrid and human; (2)  the highest precision (% of relevant docs); and, (3) the countervailing goal of total recall (% of relevant docs found). The recall goal is typically given the greatest weight, with emphasis on highly relevant. The question is how much greater weight to give recall and that depends on the total facts and circumstances of the doc review project. 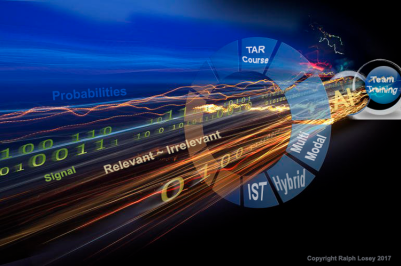 Keywords are the Model T of legal search, but we all start there. It is still a very important skill for everyone to learn and then move on to other techniques, especially to active machine learning. 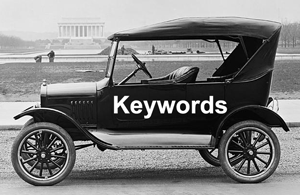 In some simple projects it can still be effective, especially if the user is highly skilled and the data is simple. It also helps if the data is well known to the searcher from earlier projects. See TAR Course: 8th Class (Keyword and Linear Review).

Below is the unedited full opinion (very short). We look forward to more good opinions by Judge Deavers on e-discovery.

This matter came before the Court for a discovery conference on May 24, 2018. Counsel for both parties appeared and participated in the conference.

The parties provided extensive letter briefing regarding certain discovery disputes relating to the production of Electronically Stored Information (“ESI”) and other documents. Specifically, the parties’ dispute centers around two ESI-related issues: (1) the propriety of a single-word search by Project name proposed by Defendant Voith Hydro, Inc. (“Voith”) which it seeks to have applied to American Municipal Power, Inc.’s (“AMP”) ESI; 1 and (2) the propriety of AMP’s request that Voith run crafted search terms which AMP has proposed that are not limited to the Project’s name. 2 After careful consideration of the parties’ letter briefing and their arguments during the discovery conference, the Court concluded as follows:

1 Voith seeks to have AMP use the names of the four hydroelectric projects at issue in this case (Cannelton, Smithland, Willow and Meldahl) as standalone search terms without qualifiers across all of AMP’s ESI. AMP proposed and has begun collecting from searches with numerous multiple-word search terms using Boolean connectors. AMP did not include the name of each Project as a standalone term.

2 AMP contends that if Voith connects all its searches together with the Project name, it will not capture relevant internal-Voith ESI relating to the construction claims and defenses in the case. AMP asserts Voith may have some internal documents that relate to the construction projects that do not refer to the Project by name, and included three (3) emails with these criteria it had discovered as exemplars. AMP proposes that Voith search its ESI collection without reference to the Project names by using as search terms including various employee and contractor names together with a list of generic construction terms and the names of hydroelectric parts.

IT IS SO ORDERED.

This entry was posted on Sunday, June 10th, 2018 at 6:29 pm and is filed under Evidence, Lawyers Duties, New Rules, Review, Search, Technology. You can follow any responses to this entry through the RSS 2.0 feed. Both comments and pings are currently closed.