This is the Full transcript of Elon Musk’s discussion of AI at the bipartisan National Governors Association Conference on July 15, 2017. 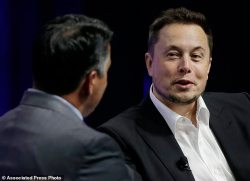 GOV. BRIAN SANDOVAL, R-NV: Are robots going to take all our jobs, everybody’s jobs, in the future? How much do you see artificial intelligence coming into the workplace?

ELON MUSK, TESLA, SPACE-X: Well first of all, on the artificial intelligence front, I have exposure to the most cutting edge AI, and I think people should be really concerned about it. I keep sounding the alarm bell.

Until people see, like, robots going down the street killing people, they don’t know how to react, because it seems so ethereal. And, I think we should all be really concerned about AI.

AI is a rare case where I think we need to be proactive in regulation, instead of reactive.

By the time we are reactive with AI regulation it is too late.

And normally the way regulations are set up is: A while bunch of bad things happen, there is a public outcry, and after many years a regulatory agency is set up to regulate that industry.

There is a lot of opposition from companies who don’t like being told what to do by regulators — it takes forever.

That, in the past, has been, bad but not something which represented a fundamental risk to the existence of civilization.

AI is a fundamental risk to the existence of human civilization in a way that car accidents, airplane crashes, faulty drugs, or bad food were not. They were harmful to certain sets of people within society, but they were not harmful to society as a whole.

AI is a fundamental existential risk for human civilization, and I don’t think people fully appreciate that.

It is not fun being regulated, it is not –it can be pretty irksome. But in the car business we get regulated by the Department of Transportation, the EPA, and a couple of others. There are such agencies in every country. In space we get regulated by FAA. And, if you asked the average person if they want to get rid of the FAA, just like take a chance on manufacturers not cutting corners in the aircraft because profits were down that quarter. Hell no, that sounds terrible.

I think even people who are extremely libertarian and free market think we should probably have somebody keeping an eye on the aurplane companies making sure they build a good aircraft. And cars and everything. There is a role for regulators, but I am against over regulation for sure.

I think we’ve got to get on that with AI pronto. And there will certainly be a lot of job disruption.

Because what will happen is: Robots will do everything better than us. I’m included. All of us.

Yeah. I’m not sure what exactly to do about this.

[laughter from the crowd]

This is really the scariest problem to me.

I really think we need government regulation here, just to — because. This is insuring the public good is served. Because you have companies that are racing — have to be racing — to build AI, or they are going to be made uncompetitive. If your competitor is building an AI and you aren’t, they will crush you.

So then you’re like, you don’t want to be crushed, so I guess we need to build it too. That’s where you need the regulators to come in and say: ‘Hey guys, you all need to really pause and make sure this is safe.’

When it is cool, and the regulators are convinced that it is safe to proceed, then you can go. But otherwise, slow down.

You kind of need regulators to do that for all the teams in the game, otherwise the shareholders will ask: ‘Why aren’t you developing AI faster? Because your competitor is.’

Okay, we gotta do that. It is like something like 12% of jobs are transport. Transport will be one of the first things to go fully autonomous.

When I say everything, the robots will do everything. Bar nothing.

You can watch the full discussion between Musk and Sandoval here on a wide variety of interesting topics: