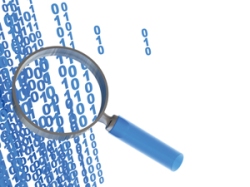 Great fanfare was provided for  the changes to the Federal Rules of Civil Procedure in December 2015. But not much attention has been given to the December 2017 changes to the Federal Rules of Evidence. Maybe that has to do with the disappearing trial, the fact that less than one percent of federal cases actually go to trial. Still, you need to know the rules of evidence admissibility, even if you are preparing for a trial that will never come. You need to collect and discover evidence in a way that it can be used, even if it is just in a motion for summary judgment.

In December 2017 two new subsections were added to Evidence Rule 902, subsections (13) and (14). They are designed to streamline authentication of electronically stored information (ESI). The goal is to eliminate the need to call a witness at trial to authenticate evidence, at least in most instances. Here are the two new provisions:

Rule 902. Evidence That Is Self-Authenticating

The following items of evidence are self-authenticating; they require no extrinsic evidence of authenticity in order to be admitted: . . .

The Evidence Rules Committee Notes explain the background of these two new subsections.

Paragraph (14). The amendment sets forth a procedure by which parties can authenticate data copied from an electronic device, storage medium, or an electronic file, other than through the testimony of a foundation witness. As with the provisions on business records in Rules 902(11) and (12), the Committee has found that the expense and inconvenience of producing an authenticating witness for this evidence is often unnecessary. It is often the case that a party goes to the expense of producing an authentication witness, and then the adversary either stipulates authenticity before the witness is called or fails to challenge the authentication testimony once it is presented. The amendment provides a procedure in which the parties can determine in advance of trial whether a real challenge to authenticity will be made, and can then plan accordingly.

Nothing in the amendment is intended to limit a party from establishing authenticity of electronic evidence on any ground provided in these Rules, including through judicial notice where appropriate.

A certification under this Rule can only establish that the proffered item is authentic. The opponent remains free to object to admissibility of the proffered item on other grounds—including hearsay, relevance, or in criminal cases the right to confrontation. For example, in a criminal case in which data copied from a hard drive is proffered, the defendant can still challenge hearsay found in the hard drive, and can still challenge whether the information on the hard drive was placed there by the defendant.

A challenge to the authenticity of electronic evidence may require technical information about the system or process at issue, including possibly retaining a forensic technical expert; such factors will affect whether the opponent has a fair opportunity to challenge the evidence given the notice provided.

The reference to Rule 902(12) is intended to cover certifications that are made in a foreign country.

The rule change is a helpful addition to the litigator’s toolkit, but many challenges remain for attorneys handling electronic evidence. I agree with Kevin Brady, who is a top expert in the field of ESI evidence, who says that “the challenge for lawyers trying to authenticate digital evidence using the traditional rules of evidence can be confusing.” This may be an understatement! Kevin thinks that part of the challenge for attorneys arises from the rapidly-evolving landscape of data sources. He gives examples such as bitcoin, blockchain, smart contracts, social media, IoT, mobile devices, and cloud computing services. Moreover, the use of social media like Facebook, LinkedIn, Instagram and others continues to increase at an unbelievable rate and adds to the problem. Moreover, according to Business Insider, there are more people using the top four social messaging apps (WhatsApp, Messenger, WeChat, and Viber) than the top four social media apps (Facebook, Instagram, Twitter, and LinkedIn). According to Tech Crunch, Facebook’s Messenger alone has more than 1.3 billion monthly active users, and Instagram is officially testing a standalone messaging app, Direct.

Recognizing the problem Kevin Brady teamed up with U.S. District Court Judge Paul Grimm, the leading judicial expert in the field, to create the Grimm/Brady Evidence Admissibility Chart shown below.

The detailed reference chart provides discovery lawyers and trial attorneys with a quick reference guide for handling many different sources of ESI evidence. It covers Rule 104 to Rule 803(6) to Rule 901 and 902. The chart provides a step by step approach for authenticating digital information and successfully getting that information admitted into evidence.

The e-Discovery Team highly recommends that you carefully study this chart. Click on the photos and they will open in a larger size. Also suggest you download your own copy here: Grimm Brady Evidence Admission Chart 2018. Many thanks to Kevin Brady for helping me with this blog. 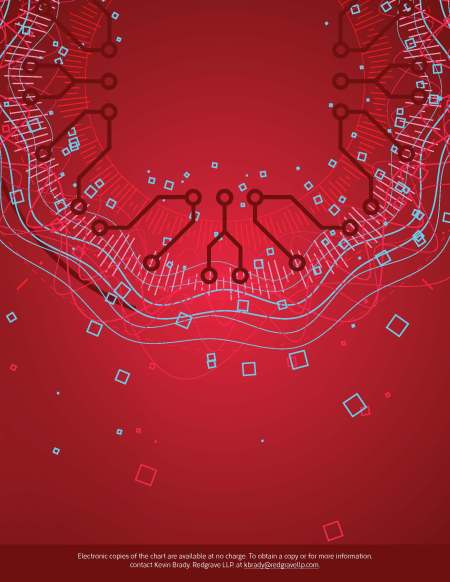 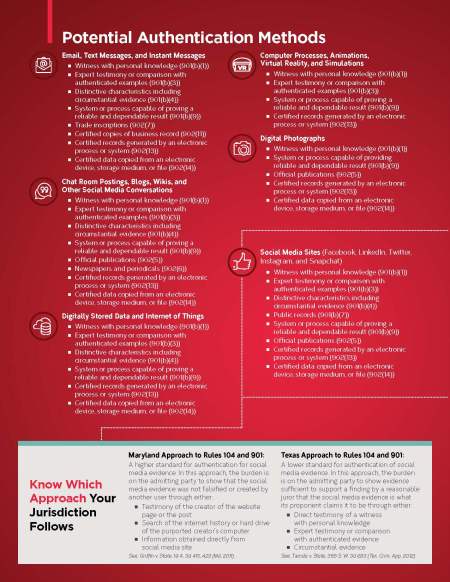 This entry was posted on Sunday, April 22nd, 2018 at 8:15 pm and is filed under Evidence, Lawyers Duties, New Rules, Technology. You can follow any responses to this entry through the RSS 2.0 feed. Both comments and pings are currently closed.