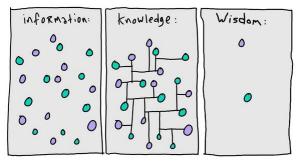 All information webs are created and maintained by Ralph C. Losey, attorney at law, in cyberspace since shortly after it opened in the 80s and physically located near the Space Port in Florida. See legal disclaimer. If you think about the biggest problems, the ones with potential for the biggest impact, you conclude that AI-Ethics is right up there. In fact, some of the greatest geniuses of our day consider the promise and danger of super-intelligent AI to be the most important issue of our day.

To learn more visit AI-Ethics.com and see the video at the bottom of the page. 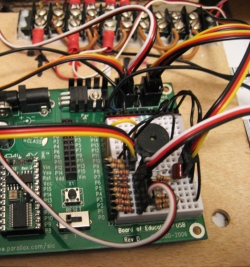 Everyone should know about hacks and hackers and the philosophy they developed, the Hacker Way. The terms hack and hackers originated in the late 1950s at MIT as part of the Tech Model Railroad Club. They called a hack any ‘project undertaken or product built not solely for some constructive goal, but with some wild pleasure taken in mere involvement.” Steven Levy, Hackers (O’Reilly 2010) at pg.10. (Levy’s excellent book contains a very detailed history of hackers up until 1983.) Now MIT defines a Hacker as “someone who applies ingenuity to create a clever result, called a “hack”.” They go on to explain:

The essence of a “hack” is that it is done quickly, and is usually inelegant. It accomplishes the desired goal without changing the design of the system it is embedded in. Despite often being at odds with the design of the larger system, a hack is generally quite clever and effective. 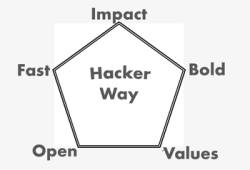 The Hacker Way philosophy that developed over the years was based on tech thoughts like these. Be Fast is still one of the fundamental Hacker Way precepts. (So too is the fundamental precept of Hands On, but more on that later.) Fast is the credo behind Facebook and most other advanced software companies. Yet, surprisingly, very few people are talking about the Hacker Way or sharing the secret sauce, the hack, behind their success. That is contrary to another fundamental hacker principle of Openness. So, I am stepping in to fill the gap. That’s what I do, my hack. (Stepping-In is discussed in Davenport and Kirby, Only Humans Need Apply, and by Dean Gonsowski, A Clear View or a Short Distance? AI and the Legal Industry, and A Changing World: Ralph Losey on “Stepping In” for e-Discovery. Also see: Losey, Lawyers’ Job Security in a Near Future World of AI, Part Two.) The Hacker Way is a path to maximum impact with your life, a path to build social values near and dear to your heart. 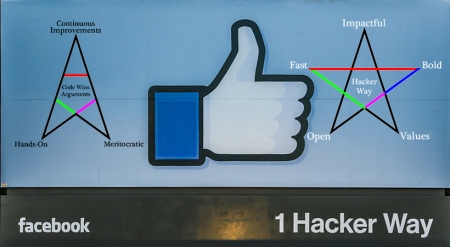 In this eleven minute video that soon follows I discuss the five principles and related ideas of the Hacker Way. I explain how these ideas can be applied to life in general, not just how they can be applied in my legal specialties, as my prior videos on the subject have done. See: the TAR Course; and HackerLaw.org for legal applications. Please leave some comments, either here or at my new Facebook site: HackerWay.org.

If you have not already read Mark Zuckerberg’s original words on the Hacker Way, I suggest you do so now. They are contained in his initial public offering Letter to Investors.  Also see my related ideas on history and social progress at Info→Knowledge→Wisdom.

Again, I look forward to your comments. 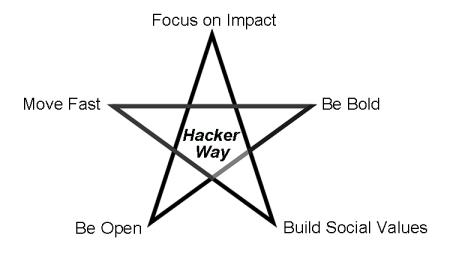 Below is a graphic showing all nine concepts of the Hacker Way following the form of a enneagon or Nonagram, also known as a Star of Goliath.

Diving Deeper Into The Hacker Way 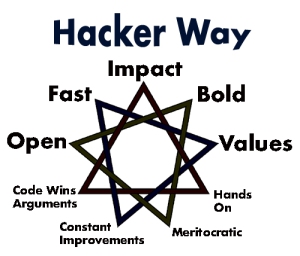 We can now dive deeper into all nine concepts of the philosophy as explained by Mark Zuckerberg in his initial Letter to Investors. The nine are shown in the figure right, which is a stylized enneagon or nonagram, also known as a Star of Goliath. The five primary ideas are shown one the top: Focus on Impact, Be Fast, Be Bold, Be Open and Develop Social Values. The bottom four are secondary, but important. You will find these four posted everywhere at Facebook headquarters: Code Winds Arguments, Hands On, Constant Improvements and Meritocratic. See: Mark Zuckerberg’s original treatise on the Hacker Way, contained in his initial Facebook public offering Letter to Investors.

Of these the most important from a philosophical point of view, the one that underlies the entire credo, is Hands On. The Hacker Way is a pragmatic type of philosophy based on action and evaluation of results. Just do it. Do not over-think it. You will learn by your actions. Nothing is perfect the first time out, but you keep on improving it. The process continues indefinitely.

Here is one of Mark Zuckerberg’s best known lines on the Hacker Way, a philosophy followed by Facebook, and many, if not most, other high-tech companies:

The Hacker Way is an approach to building that involves continuous improvement and iteration. Hackers believe that something can always be better, and that nothing is ever complete. They just have to go fix it — often in the face of people who say it’s impossible or are content with the status quo.

Hackers try to build the best services over the long term by quickly releasing and learning from smaller iterations rather than trying to get everything right all at once.

Here is my latest video commenting on the nine fundamental ideas of the Hacker Way as set out by Zuckerberg. 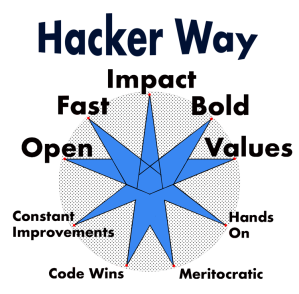 The Hacker Way has always guided my career as a lawyer. It lead to my limiting my practice to e-discovery in 2006 and my focus on AI-Ethics in 2017. See the new web page with address AI-Ethics.com. Below is the video where I talk about the impact of Hacker Way on my legal practice.