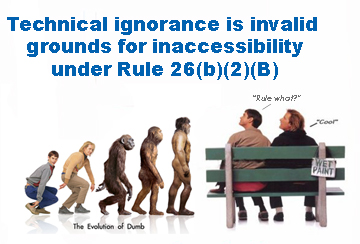 Plaintiff’s counsel in a district court case in Colorado lacked the technical ability to open and read most of his client’s emails. He figured that since he could not read them, he did not have to produce them. Instead of producing the thousands of emails on a DVD containing his client’s college email, he just produced the ten he could read, and ignored the rest. Garcia v. Berkshire Life Ins. Co. of America, 2007 U.S. Dist. LEXIS 86639 (D. Colo. Nov. 13, 2007).

Although plaintiff did not argue Rule 26(b)(2)(B), and the court did not use the rule’s framework for analysis, plaintiff’s position was basically that since the email was not reasonably accessible to plaintiff’s counsel, it did not have to be produced. After all, he argued, there could be privileged materials in there. Apparently it never occurred to him to hire someone with technical competence to open and read the emails for him. Here are plaintiff’s counsel’s own words (describing himself) trying to justify his actions to the court:

Plaintiff’s counsel immediately tried to access the information on the DVD, but encountered software issues. Counsel eventually found what it believed to be the proper software and accessed the contents of the DVD. Plaintiff was not, apparently, able to access some 5,000 emails, and had no way of knowing the content of the disc except for what was displayed. Of what was displayed, Plaintiff printed and reviewed those emails and created a detailed privilege log.   . . .

Plaintiff was unable to access all of the data allegedly contained on the DVD with the software employed to provide all responsive emails. . . . Unfortunately, Plaintiff’s counsel does not employ a full time computer technician, [sic] occasionally a technology issues [sic] arises which exceeds Plaintiff’s computer expertise. When those events arise, counsel works to obtain an understanding and familiarity with the software and medium. Plaintiff, in good faith, believed that all the unprivileged, relevant emails had been submitted. If there are in fact additional emails on the DVD, plaintiff was unaware of this. However, there was certainly no attempt to hide any of the content.

Not surprisingly, Magistrate Judge Boyd N. Boland was not buying this excuse:

Plaintiff’s claim that she acted in good faith with respect to the contents of the DVD goes only so far. Perhaps plaintiff’s counsel can be heard to plead technical ignorance or mistake in his initial dealings with the DVD, but by September 21, 2007, upon the receipt of Ms. Yates’ letter [defense counsel], he was on notice of the potential problem and was obligated to seek competent professional assistance to ascertain the truth about the contents of the DVD. He did not do so, and apparently still has not done so, in view of his expressed doubt, unsupported by any evidence, that the DVD contains substantial additional material.

The plaintiff herself, who was also an attorney (or at least had graduated from law school), was not much help. In fact, a comment by Judge Boland suggests his serious concerns about her actions:

Berkshire has attached to the Second Motion to Compel an e-mail string indicating that the plaintiff communicated with an IT employee of the University of Denver, who may have attempted to mislead Berkshire about the scope of e-mails available to be retrieved from the University’s system. (record cite omitted) This e-mail string raises serious concerns.

The plaintiff sued the defendant disability insurance company claiming that she was totally disabled from a sleep disorder, post traumatic stress, and adult attention deficit disorder. She claimed the original cause of her disabling traumatic stress was an aggressive investigation by the Department of Housing and Urban Development into her real estate business. She went out on disability shortly after the HUD investigation in 1999, and claimed inability to return to work since that time. Plaintiff claims her traumatic stress was later aggravated when the psychiatrist treating her disorder allegedly molested her during a one-year sexual relationship.

The defendant insurance company, Berkshire, learned that plaintiff began attending the University of Denver after she stopped work in 1999. Her studies there were prodigious. She attended the Womens College from 1999-2001, law school from 2001-2006, and the Graduate School of International Studies in 2002.  In 2006, she received an LLM in Natural Resources and Environment. Obviously plaintiff was no dummy, and so Berkshire wondered whether she was truly disabled as she claimed.

Berkshire wrote and asked the University for all of plaintiff’s email, rather than subpoena the school. Not sure why they took that approach, and with hindsight, they would have been better off with a subpoena. Berkshire asked that the production be made in native format with all metadata preserved.  The University responded to the request by producing the requested emails to plaintiff’s counsel. They were produced on a DVD, not a CD, because, as the school explained, they would not all fit on a CD.

Plaintiff’s counsel was then to review the DVD, remove and log all emails to which a privilege was claimed, and produce the rest to defense counsel. A little over a week later, plaintiff produced printouts of ten email strings, with two attachments. Plaintiff’s counsel also produced a privilege log listing 135 additional emails. Obviously this production did not square with the University’s explanation that they needed a DVD to hold all of the plaintiff’s emails. Defense counsel called them on this discrepancy, in an attempt to voluntarily obtain a full production without having to file another motion to compel.

After two letters, plaintiff’s counsel finally responded by producing the DVD to defense counsel, but only for her to determine if there were additional files on the DVD as she contended, and only after she promised that no one would look at the contents of any files on the DVD. The IT technician for defense counsel inspected the DVD and found more than 4,000 emails with 1,500 attachments of various types. Defense counsel returned the DVD, reported the findings, and told plaintiff’s counsel that:

Your production of 10 emails, and a privilege log with 135 other emails — and your representation that this was  all that was on the DVD — is extremely troubling and points again toward deception.

Even after this disclosure, plaintiff’s counsel refused to budge, and defense counsel had to move to compel discovery. In response, plaintiff’s counsel continued to doubt there were in fact additional emails on the DVD, and claimed a good faith mistake based on his computer incompetence, as quoted above.  Plaintiff at this point also added a new argument, that the emails would be irrelevant and their disclosure would invade her privacy rights. Here is Judge Boland’s response to that argument:

In addition, I am not persuaded by the plaintiff’s relevancy argument. During the time the plaintiff claimed to be totally disabled, for emotional and cognitive reasons, from working as an executive in a real estate company or in a comparable position, she earned an undergraduate degree, a law degree, and began work on a masters degree. (record cite omitted) It is counterintuitive, at least, to think that anything she wrote in an e-mail on her university account during that time period is not relevant to the issue of her disability. In particular, I agree with Berkshire that the e-mails are relevant because they may show “to what extent Ms. Garcia was working or developing her businesses during the period of claimed disability” and that “her ability to communicate effectively by email and to develop PowerPoint presentations and spreadsheets [may] rebut her claimed inability to think clearly and to interact socially.” (record cite omitted) The plaintiff has made no showing to the contrary.

To address plaintiff’s privacy concerns, the court indicated a willingness to enter a confidentiality order, but the motion to compel was granted.

Plaintiff also raised privilege issues to try to prevent or at least delay the production, arguing that since they were not able to open the emails and attachments, they did not know if any were privileged. The Court rejected this argument, stating plaintiff had sufficient protection by new Rule 26(b)(5)(B) with its built-in clawback provisions.

Berkshire also sought production of some of the 135 emails originally withheld as privileged.  The challenged emails were to and from plaintiff’s brother and other family members. Plaintiff claimed they were privileged under the “common interest” doctrine, even though no attorney was involved with these emails.  The court explained that this doctrine applies: “when parties with separate lawyers consult together under the guise of a common interest or defense.” This was a diversity removal case, and so the district court looked to the state law of Colorado governing privilege. Plaintiff claimed the privilege doctrine applied to her brother and other family members because she had already assigned the contingent proceeds of this legal action to them. The court disagreed, holding:

I call this a sequel “dumb and dumber” case, because it is remarkably similar to another case I frequently mention in my e-discovery presentations. Martin v. Northwestern Mutual Life Insurance Company, 2006 WL 148991 (M.D Fla. Jan. 19, 2006).  The plaintiff in Martin was a trial lawyer who had sued Northwestern for disability benefits. Martin produced only paper records, and claimed that was complete. Defendant then discovered that plaintiff’s office computers contained voluminous additional electronic records. Defendant moved for sanctions. Plaintiff and his counsel defended on the basis of “computer illiteracy.” Magistrate Judge Pizzo responded as follows:

Plaintiff’s reasons for non-production are unsatisfactory and warrant sanctions.  … His claim that he is so computer illiterate that he could not comply with production is frankly ludicrous.

I could not agree more. Still, it is fairly certain that we will continue to see variations of the “dumb and dumber” defense for years to come. Hopefully, the next sequel to this movie will feature different characters. The plaintiff’s attorney representing an alleged disabled attorney scenario is getting old fast.

This entry was posted on Saturday, December 8th, 2007 at 4:40 pm and is filed under Lawyers Duties, New Rules, Spoliation/Sanctions. You can follow any responses to this entry through the RSS 2.0 feed. Both comments and pings are currently closed.