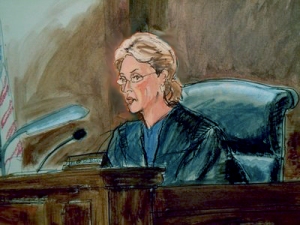 Linked here is the Legal Memorandum filed on February 21, 2011, by the defendants in NDLON v. ICE. The United States claims that it will be irreparably damaged if required to follow Judge Scheindlin’s prior order of February 7, 2011. See New Opinion by Judge Scheindlin on FOIA, Metadata and Cooperation. This opinion required the production of standard metadata fields. The government has also filed a notice of appeal of Judge Scheindlin’s order.

An interlocatory appeal to the Circuit Court on a discovery issue is always a long shot. Appeals courts usually do not accept appeals of non-final discovery orders. The appellant has to show irrepairable harm. Still, this is an unusual case as production of documents goes to the merits of the case itself.

The argument in the government’s linked memorandum is focused on why Judge Scheindlin should stay her own order pending the outcome of the appeal. Alternatively, the government defendants asks for a stay pending the Second Circuit’s ruling on a motion for stay.

Here are highlights from the government’s lengthy (26 page) argument:

Given the sea change in FOIA practice that could result from this Order, the Second Circuit should have an opportunity to conduct a full review before the Government is required to produce the records that are the subject of the Order. (pg. 3)

As the Court has acknowledged, whether metadata is encompassed in a FOIA request for “records” is “complicated” and presents an issue of first impression. In light of the enormous potential implications of the Court‟s Order for FOIA practice throughout the country, as well as the Government‟s determination to appeal that Order, a stay should be granted pending appeal. (pgs. 9-10)

By ruling that certain metadata is “readily reproducible” without receiving briefing and factual declarations, the Court determined issues in dispute without a proper record. This ruling was contrary both to FOIA, which contemplates that agencies will be permitted to submit declarations on the issue of reproducibility, and that those declarations will be accorded substantial weight, see 5 U.S.C. § 552(a)(4)(B), and to the current version of Rule 56(f) of the Federal Rules of Civil Procedure, which requires, inter alia, notice and an opportunity to respond when a court intends to grant summary judgment for a non-movant, or on its own. (pg. 19)

Fundamentally, the Government‟s production obligations under FOIA are governed by the statute, not the Federal Rules. The Court‟s reference to what is expected of litigators “when making a document production in the twenty-first century,” Order at 16, has little bearing when applied to the obligations of FOIA administrators. (pg. 19)

Furthermore, the Court misperceived the harm imposed by its Order on the Government. See Order at 20. As discussed supra, the FBI would be required to redo its entire search for records—a search that already has generated approximately 500,000 pages of potentially responsive documents. In addition, because of the time constraints associated with the “opt-out” production, ICE obtained permission to use an e-discovery program called Clearwell6 for FOIA purposes, at a cost of over $270,000 in upgrades, and the acquisition of a $32,000 server. See Pavlik-Keenan Decl., ¶¶ 7-8, 11. Continued use of the software will require an additional expenditure of funds in an unknown amount, perhaps in the hundreds of thousands, if not millions, of dollars. (pgs 23-24)

It is plainly in the public‟s interest to resolve this critical FOIA issue at the appellate level before the Government is required to release the very records that would be at issue in the appeal. As this Court correctly noted in the Opinion, “this is an issue of first impression.” Order at 16. The Court also noted at the January 12, 2011 conference: “This is kind of complicated. This is not going to be easy. . . . You are asking me to figure out what is required of FOIA requests.” Jan. 12, 2011 Hrg. Tr. at 13. Thus, providing defendants the opportunity to seek further review of the important issues at hand—i.e., what is required of FOIA requests with respect to metadata, the intersection vel non of the Federal Rules of Civil Procedure and the processing of FOIA requests, whether the metadata identified by the Court is presumptively producible, and the broader question of whether metadata even is an agency record subject to FOIA—would serve the public interest. That salutary purpose is even more compelling where, as here, the Court issued a decision with potentially sweeping consequences for FOIA practice throughout the country on what is essentially an empty factual record. The public interest thus would be served by a stay pending appeal. (pgs. 24-25)

This entry was posted on Thursday, March 10th, 2011 at 4:05 pm and is filed under Lawyers Duties, Metadata, Technology. You can follow any responses to this entry through the RSS 2.0 feed. Both comments and pings are currently closed.

5 Responses to Government Appeals and Seeks a Stay of Judge Scheindlin’s FOIA Order on Metadata in NDLON v. ICE