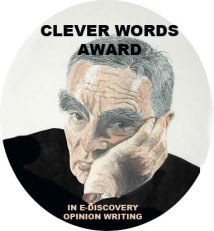 With this blog I begin a series of Clever Words Awards to judges for exceptional legal writing on electronic discovery. The recognition will go to any judge, state or federal, who uses a particularly good expression or phrase in an otherwise well-written opinion. The order must in some way concern electronic discovery and be written after 2010. I will lavish praise on the judge who not only makes a well-reasoned decision, but goes the extra mile to write it up in top-notch fashion, even including a clever phrase, the more unforgettable the better. Pity that ethics forbid it (I think), or I’d go out-of-pocket to add a cash prize too. Still, ethics do not forbid my offering recognition and ebullient admiration for a judge’s brilliance in legal prose. (Of course, an opinion in any matter in which my firm is a participant is disqualified from consideration.)

I have already picked a winner of the first Clever Words Award, but welcome your nominations for future awards. I don’t plan on any set schedule for making these awards, but based on the great history of judicial writing in this area, I expect there will be several every year.

Good Writing and Memorable Phrases Should Be Honored

I love reading any cleverly written turn of phrase in a legal opinion. Like many lawyers, I remember well the great writing of judicial giants in history, such as Learned Hand whose image graces our award. An original turn of phrase at the right spot in a judge’s opinion, which is often at the very beginning, can make or break an opinion. It can be an entirely new phrase, or a paraphrase, or exact quote of a well-known line. Whatever. It makes my day. (Yes. I’m easily pleased.) There are many judges who go the extra mile to be very good writers. They make the  effort to add excellent writing to their orders, including sometime a particularly clever and creative turn of phrase. It is not required, they are only supposed to make a just order, not an eloquent one, but they do it anyway. They care about quality craftsmanship. Although you might not know it from this blog, I do too. I also appreciate a touch of humor in this very serious business of ours, and most clever phrases have that element too.

A judge does not do this just for show. A clever phrase is never idle. It is used to hammer home a point, to communicate better to the parties and lawyers before them. It can make an order memorable. For example, who can forget Judge Grimm’s gang that couldn’t spoliate straight in Victor Stanley II.  How about Judge Facciola’s hesitance to  go where angels fear to tread and opine on search complexity in Equity Analytics? 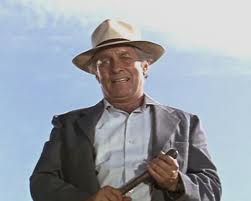 Judge Scheindlin is another master of legal prose who frequently includes clever literary or movie references. Recall her quote of  Santayana in Pension Committee  of  “those who cannot remember the past are condemned to repeat it,” not to mention her famous quote in Zubulake V:  “What we’ve got here is a failure to communicate.”

There have been many clever words used in past opinions on e-discovery and they all deserve to be honored. But alas I do not have time to do them all justice. For that reason this series of awards will be limited to opinions written after 2010. I want to encourage this kind of extra effort and creativity in the future, and to honor the judges who take the time to do so. 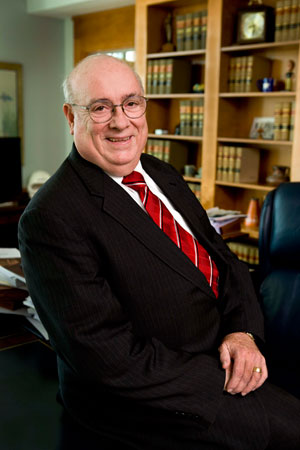 The first ever Clever Words Award for brilliance in legal opinion writing on electronic discovery issues goes to Royce C. Lamberth, Chief Judge of the United States District Court for the District of Columbia, for his May 9, 2011, Memorandum Opinion in DL v. District of Columbia. A copy of the winning order is attached. The clever phrase in the order that makes it a clear winner is found in the first full paragraph (emphasis added):

Imagine a standup comic who delivers the punch-lines of his jokes first, a plane with landing gear that deploys just after touchdown, or a stick of dynamite with a unique fuse that ignites only after it explodes. That’s what document production after trial is like—it defeats the purpose. Yet, the District’s Motion would have this Court bless its decision to violate multiple Court orders, ignore the Federal Rules’ carefully calibrated discovery apparatus, and produce thousands of responsive e-mails after trial ended. A discovery violation of this exotic magnitude is literally unheard of in this Court, and when—on the first day of trial—the District’s plan was revealed, this Court held that the District had waived objections (including privileges) with regard to all of the unproduced e-mail and ordered it to produce them all within one week of the close of trial. Before the Court now is the District’s Motion to reconsider that Order. After exploring the relevant aspects of this case’s factual background, the Court will explain its reasons for denying the District’s Motion.

Well done Judge Lamberth! The next time I see you at an e-discovery conference, I insist on buying you a cup of coffee. If I remember to be really clever, I’ll pay the barista first, and then we’ll decide what to order.

Like most well written orders, there are more good lines than the above quoted. It contains solid reasoning and analysis and good advice not only for these litigants, but for the Bar in general. It is not just a clever writing, it is an important legal opinion. Consider these two paragraphs near the end, at pages 16 and 17 of the Memorandum Opinion. These cogent words, including more memorable lines, helped cement this writing as the winner of the e-Discovery Team’s first Clever Words Award.

Whether the District made a good-faith effort to produce all responsive e-mails before the trial is irrelevant. As explained above, it was not sanctioned for failing to make a good-faith effort. It was sanctioned for openly, continuously, and repeatedly violating multiple Court orders, failing to adhere to or even acknowledge the existence of the Federal Rules’ discovery framework, and committing a discovery abuse so extreme as to be literally unheard of in this Court. The Rules require more than simply making a good-faith effort to produce documents. They require adherence to a very precise framework for navigating the discovery process. Moreover, the duty to adhere to clear Court orders is among a lawyer’s most basic. Were it not for those two directives—the Federal Rules’ discovery framework and Court orders regarding discovery—discovery would devolve into pure bedlam. Disciplined adherence to those Rules and Orders on the part of courts as well as parties is the only tool our system has to wrangle the whirlwind as it were and tame an otherwise unmanageable part of the litigation process. A good- faith effort to produce documents in the absence of adherence to Court orders and the Federal Rules is useless. …

The District would be well-advised to invest the time it’s spent ankle-biting the plaintiffs for various alleged discovery abuses in bringing its own conduct in line with the Federal Rules of Civil Procedure and this Court’s Orders. In short, this is a prime example of the lesson many learn as children: When you point one finger at another, three point back at you.

Judges deserve recognition for all of their hard work. But I especially appreciate good writing in legal opinions. I’m sure you do too. Help me to find and recognize today’s learned hands. Do you know of a judge who has written an especially good opinion in 2011 on e-discovery, one with a particularly memorable phrase? Tell me about it and why you think it should receive our Clever Words Award.  The only limitation is that the opinion be written after 2010.  Please send me a copy of the opinion, and highlight the particular phrase or phrases that you like best. I can be reached at Ralph.Losey@Gmail.com (and please don’t write to try to sell me stuff).

I leave you with a few words of Judge Learned Hand (shown right as a rather scary looking young lawyer), who, if he were alive today, would surely write opinions on the wonderful world of e-discovery, and probably the Internet too:

The hand that rules the press, the radio, the screen and the far-spread magazine, rules the country.

Words are chameleons, which reflect the color of their environment.

Our dangers, as it seems to me, are not from the outrageous but from the conforming; not from those who rarely and under the lurid glare of obloquy upset our moral complaisance, or shock us with unaccustomed conduct, but from those, the mass of us, who take their virtues and their tastes, like their shirts and their furniture, from the limited patterns which the market offers.

Life is made up of a series of judgments on insufficient data, and if we waited to run down all our doubts, it would flow past us.

This entry was posted on Sunday, July 10th, 2011 at 11:09 am and is filed under Lawyers Duties, New Rules, Review, Search, Spoliation/Sanctions. You can follow any responses to this entry through the RSS 2.0 feed. Both comments and pings are currently closed.