The e-Discovery Team’s second Clever Words Award for brilliance in e-discovery opinion writing goes to Marcia G. Cooke, U.S District Court Judge for the Southern District of Florida for her Omnibus Order For Sanctions, dated August 3, 2012. Judge Cooke entered this sanctions order in a well-known case in Miami growing out of $1.2 billion Ponzi scheme by Scott Rothstein. Coquina Investments v. Rothstein, Case No. 10-60786-Civ-COOKE/BANDSTRA, Dist. Court, S. Dist, Florida. Judge Cooke wins our Clever Words Award by invoking and combining the well-known adage of too many cooks spoil the broth with the image of hundreds of Inspector Clouseaus as bungling cooks.

That kind of image makes everybody laugh, except, of course, for the over two-hundred defense lawyers in Coquina Investments stung by the bench slap. I especially like the references to the Pink Panther and Inspector Clouseau doing e-discovery. In fact, I evoked the image myself in April 26, 2009, in one of my all-time favorite blogs: Inspector Clouseau and the Insights of Judge Facciola and Malcolm Gladwell Suggest a Bright Future for e-Discovery Lawyers.

Before I go into the details described by Judge Cooke of hundreds of Clouseau cooks, a little about the Clever Words Award. The e-Discovery Team’s Clever Words Award was born in July 2011. Its symbol is the image of the great Judge Learned Hand. The first award went to Royce C. Lamberth, Chief Judge of the United States District Court for the District of Columbia, for his May 9, 2011, Memorandum Opinion in DL v. District of Columbia. We have been biding our time ever since waiting for the perfect opinion for a second award. Our wait is now over with Judge Cooke’s ruling on four post-trial sanctions motions in Coquina Investments v. Rothstein. The motions pertain to alleged e-discovery abuses by a bank corporate co-defendant whom plaintiff alleged should have discovered the Ponzi scheme and protected them from it. The sanctions motions were against the bank and one of the large national law firms that represented it.

As I explained when I first announced the award a year ago, for a judge to earn the award the opinion  they write must not only be well-reasoned, but must go the extra mile to be written in top-notch fashion, even including a clever phrase, the more unforgettable the better. Announcing the e-Discovery Team’s “Clever Words Award” for Excellence in Judicial Opinion Writing. Certainly the phrases in Coquina Investments invoking the image of hundreds of Clouseaus cooking up an e-discovery production is unforgettable. But to win an opinion must do more. It cannot be just flash. As I explained before: a judge does not do this just for show. A clever phrase is never idle. It is used to hammer home a point, to communicate better to the parties and lawyers before them.

Judge Marcia Cooke’s Omnibus Order For Sanctions in Coquina Investments does just that. Moreover, it gets extra points for the fact that the clever words also serve a higher purpose. The sanctions entered to cure the botched meal made the jury verdict virtually appeal-proof. Now that is truly clever.

Marcia G. Cooke, United States District Court Judge for the Southern District of Florida, is the first black woman federal judge in Florida. She was nominated by President Bush in 2003 and confirmed by the Senate in 2004. Although Florida is my home state, I have not yet had the honor of meeting Marcia Cooke. Although younger in age than me, Judge Cooke has long experience as a federal judge. She served as a Magistrate Judge for the U.S. District Court for the Eastern District of Michigan from 1984 to 1992. In 1992 Marcia Cooke moved to Florida where she served as director of professional development and training at the U.S. Attorney’s Office for the Southern District of Florida. From 1992 to 1994 she was the Executive Assistant U.S. Attorney for the Southern District of Florida, and then returned to her director of professional development and training position from 1994 to 1999. She is obviously an expert in legal training.

Ms. Cooke then served as chief inspector general for the Executive Office of the Governor of Florida under Jeb Bush from 1999 to 2002. From 2002 to 2004 she served as assistant county attorney in Miami-Dade County. Marcia Cooke was nominated for the position of District Court Judge in 2003 by President Bush and confirmed by the Senate on May 18, 2004. We are proud to have her as the second ever recipient of the e-Discovery Team’s Clever Words Award.

Now for the clever words that earned Judge Cooke the award. I am going to exercise my prerogative as editor to delete the prominent law firm names and the bank name from the quotes (indicated by ….). Please forgive my perhaps misguided professional courtesy, but the sad truth is this could happen to any law firm or in-house counsel. Why add salt to the wounds? There is a huge competency gap when it comes to e-discovery among most lawyers in the country in both big firms and small. I have seen some improvement over the last six years, usually in the large law firms, but not nearly enough. Lawyers need in-depth training, and even though it is easily available, most lawyers do not bother (so far anyway). Instead, lawyers prefer either to wing-it, or to just devote a couple of hours to short CLEs. They basically learn just enough to be dangerous, as we see in Coquina Investments. Eventually law firm clients will demand competence, perhaps even expertise in e-discovery, and not just rely on firm name alone, but we are not there yet.

Aside from the name omissions, Judge Cooke’s words shown here are otherwise unaltered. I suggest that you read the entire opinion to see for yourself the incredible facts of bungled ESI searches and review that prompted this rebuke of the defendant and its many attorneys. The first winning quote is found at page two of the opinion.

In many ways, this is a case of too many cooks spoiling the broth. Over 200 ….. attorneys were involved in this case. There were separate teams of …… lawyers to handle banking issues, document production, and pretrial and trial practice. … Bank retained two different firms to work on different aspects of the Rothstein fallout, but the firms did not have any mutual coordination. One of the firms, ……., then hired a consultant to perform work, which was relevant to the Rothstein litigation, but no one ever informed …… As a result, it often times appears that this litigation was conducted in an Inspector Clouseau-like fashion. However, unlike a Pink Panther film, there was nothing amusing about this conduct and it did not conclude neatly.

The conduct did not conclude neatly, but it did have a happy ending for the plaintiff Coquina Investments. After all, in spite of the apparently accidental hide-the-ball antics by defendant’s attorneys, it just took a few hours for the jury to rule in favor of Coquina Investments. Remember, these were post-trial motions for sanctions. This all sounds eerily similar to Qualcomm v. Broadcom and its many post-trial motions.

Again, I suggest you read the thirty-page opinion for the laundry list of e-discovery errors, if nothing else it serves as a warning for things to avoid in complex commercial litigation. Judge Cooke summarizes her findings at page 23:

Believe it or not, things could have been worse for the 200 or so attorneys involved. The plaintiff had sought personal sanctions against many of them. Apparently Judge Cooke accepted the empty head pure heart defense of Inspector Clouseau in her ruling, and decided a good tongue lashing would be enough:

The individual …. attorneys’ handling of this case left much to be desired. The document review and production appears to have been conducted in an almost ad hoc manner. The attorneys failed to adequately conduct document searches in response to Coquina’s counsel’s requests and this Court’s inquiries. The attorneys produced key documents on the eve of trial, and in the midst of trial, because of failures in their document search and production procedures. Although I recognize that the attorneys were dealing with a high volume of documents, the amount of production errors that occurred throughout these proceedings were simply incredible, especially coming from lawyers in a well regarded firm like …. , which in many ways earns its reputation from being able to litigate large, complex actions.

Having reviewed the evidence, however, I do not find that sanctions, including a finding of contempt, are warranted against any of the individual attorneys. The evidence does not support a finding that any of them acted willfully or in bad faith. Although they certainly acted with negligence, I am not prepared, on this record, to enter sanctions personally against them.

As for the higher purpose of appeal-proofing, note how the sanctions entered not only taxed defendant with plaintiff’s fees and costs, but also established the existence of key facts:

I will therefore direct that the facts that … Bank’s monitoring and alert systems were unreasonable and that … Bank had actual knowledge of Rothstein’s fraud be taken as established for purposes of this action. See Fed. R. Civ. P. 37(b)(2)(A)(i). This sanction will prevent further prejudice to Coquina in an eventual appeal on that issue.

Game over. There is now a second defense to the jury verdict. That is a harsh sanction. I can imagine that Coquina Investments was by now laughing all the way to the bank.

Too bad for the defendant bank. It probably did not have to be that way. With one well-trained strong cook in charge of defendant’s e-discovery, an entirely different outcome might have been possible. Perhaps even a palatable broth of e-based truth could have been served. The outcome of the trial might have been different. It might not have been necessary at all. Perhaps there would have been a fair settlement instead of a trial. We will never know. To quote the immortal words of Jacques Clouseau interacting with his boss: 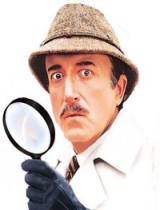 Commissioner Braithwaite: I think it only fair to say that your being brought in on this case was not my idea.
Inspector Clouseau: You are too modest.

Peter Sellers played the best Clouseau in the Pink Panther movies, but Steve Martin did a pretty good job too. See this YouTube video highlight of some of his best moments and note the reference to forensics and email.

This entry was posted on Sunday, August 19th, 2012 at 10:12 am and is filed under Evidence, Lawyers Duties, New Rules, Review, Search, Spoliation/Sanctions, Technology. You can follow any responses to this entry through the RSS 2.0 feed. Both comments and pings are currently closed.