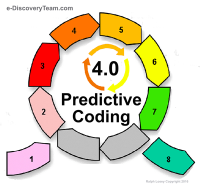 There has been no change in this step from Version 3.0 to Version 4.0. This last step is where the relevant documents are reviewed again and actually produced. This step is also sometimes referred to as Second Pass Review. Technically, it has nothing to do with a predictive coding protocol, but for completeness sake, we needed to include it in the work flow. This final step may also include document redaction, document labeling, and a host of privilege review issues, including double-checking, triple checking of privilege protocols. These are tedious functions where contract lawyers can be a big help. The actual identification of privileged documents from the relevant should have been part of the prior seven steps.

Always think of production in e-discovery as phased production. Do not think of making one big document dump. That is old-school paper production style. Start with a small test document production after you have a few documents ready. That will get the bugs out of the system for both you, the producer, and also for the receiving party. Make sure it is in the format they need and they know how to open it. Little mistakes and re-dos in a small test production are easy and inexpensive to fix. Getting some documents to the requesting party also gives them something to look at right away. It can buy you time and patience for the remaining productions. It is not uncommon for a large production to be done in five or more smaller stages. There is no limit so long as the time delay is not overly burdensome.

Multiple productions are normal and usually welcome by the receiving party. Just be sure to keep them informed of your progress and what remains to be done. Again, step one – Talk – is supposed to continue throughout a project. Furthermore, production of at least some documents can begin very early in the process. It does not have to wait until the last step. It can, for instance, begin while you are still in the iterated steps four, five and six. Just make sure you apply your quality controls and final second pass reviews to all documents produced. Very early productions during the intensive document training stages may help placate a still distrustful requesting party. It allows them to see for themselves that you are in fact using good relevant documents for training and they need not fear GIGO. 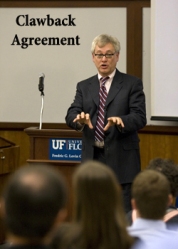 The format of the production should always be a non-issue. This is supposed to be discussed at the initial Rule 26(f) conference. Still, you might want to check again with the requesting party before you select the production format and metadata fields. More and more we see requesting parties that want a PDF format. That should not be a problem. Remember, cooperation should be your benchmark. Courtesy to opposing counsel on these small issues can go a long way. The existence of a clawback agreement and order, including a Rule 502(d) Order, and also a confidentiality agreement and order in some cases, should also be routinely verified before any production is made. This is critical and we cannot over-state its importance. You should never make a production without a 502(d) Order in place, or at least requested from the court. Again, this should be a non-issue. The forms used should be worked out as part of the initial 26(f) meet and greet.

Here is a short, five-minute video summary of this step.

After the second pass review is completed there is still one more inspection, a short third pass. Before delivery of electronic documents we perform yet another quality control check. We inspect the media on which the production is made, typically CDs or DVDs, and do a third review of a few of the files themselves. This is an important quality control check, the last one, done just before the documents are delivered to the requesting party. You do not inspect every document, of course, but you do a very limited spot check based on judgmental sampling. You especially want to verify that critical privileged documents you previously identified as privileged have in fact been removed, and that redactions have been properly made. Trust but verify. Also check to verify the order of production is what you expected. You also verify little things that you would do for any paper production, like verify that the document legends and Bates stamping are done the way you wanted. Even the best vendors sometimes make mistakes, and so too does your team.

You need to be very diligent in protecting your client’s confidential information. It is an ethical duty of all lawyers. It weighs heavily in what we consider a properly balanced, proportional approach. That is why you must take time to do the Production step correctly and should never let yourself be rushed. Here is a short video on Losey’s philosophy of proportional balance in legal services, including a discussion of the mentioned final spot check of production CDs.

The final work included here is to prepare a privilege log. All good vendor review software should make this into a semi-automated process, and thus slightly less tedious. The logging is typically delayed until after production. Check with local rules on this and talk to the requesting party to let them know it is coming.

One final comment on the e-Discovery Team’s methods. We are very hyper about  time management throughout a project, but especially in the last step. Never put yourself in a time bind. Be Proactive. Stay ahead of the curve. This is important for the entire project, but especially in the last step. Mistakes are made when you have to rush to meet tight production deadlines. You must avoid this. Ask for an extension and motion the court if you have to. Better that than make a serious error. Again, produce what you have ready and come back for the rest.

Here is a video on the importance of good time management to any document review project.

Go on to the Seventeenth class.

Or pause to do this suggested “homework” assignment for further study and analysis.

SUPPLEMENTAL READING: It is important to have a good understanding of privilege and work-product protection. The basic U.S. Supreme Court case in this area is Hickman v. Taylor, 329 US 495 (1947). Another key case to know is Upjohn Co., v. U.S. 449 U.S. 383 (1981).  For an authoritative digest of case law on the subject with a8 e-discovery perspective, download and study The Sedona Conference Commentary on Protection of Privileged ESI 2015.pdf (Dec. 2015).

EXERCISES: Study Judge Andrew Peck’s form 502(d) order.  You can find it here. His form order started off as just two sentences, but he later added a third sentence at the end:

The production of privileged or work-product protected documents, electronically stored information (“ESI”) or information, whether inadvertent or otherwise, is not a waiver of the privilege or protection from discovery in this case or in any other federal or state proceeding. This Order shall be interpreted to provide the maximum protection allowed by Federal Rule of Evidence 502(d).
Nothing contained herein is intended to or shall serve to limit a party’s right to conduct a review of documents, ESI or information (including metadata) for relevance, responsiveness and/or segregation of privileged and/or protected information before production.

Do you know the purpose of this additional sentence? Why might someone oppose a 502(d) Order? What does that tell you about them? What does that tell the judge about them? Losey’s law firm has been opposed a few times, but has never failed. Well, there was that one time, where both sides agreed, and the judge would not enter the stipulated order, saying it was not necessary, that he would anyway provide such protection. So, mission accomplished anyway.

Do you think it is overly hyper for us to recommend that a 502(d) Order be entered in every case where there is ESI review and production? Think that some cases are too small and too easy to bother with that? That it is o.k. to just have a claw-back agreement? Well take a look at this opinion and you may well change your mind. Irth Solutions, LLC v. Windstream Communications, LLC, (S.D. Ohio, E. Div., 8/2/17). Do you think this was a fair decision? What do you think about the partner putting all of the blame on the senior associate (seven-year) for the mistaken production of privileged ESI? What do you think of the senior associate who in turn blamed the junior associate (two-year)? The opinion does not state who signed the Rule 26(g) response to the request to produce. Do you think that should matter? By the way, having been a partner in a law firm since at least 1984, I think this kind of blame-game behavior was reprehensible!

Students are invited to leave a public comment below. Insights that might help other students are especially welcome. Let’s collaborate!

This site uses Akismet to reduce spam. Learn how your comment data is processed.